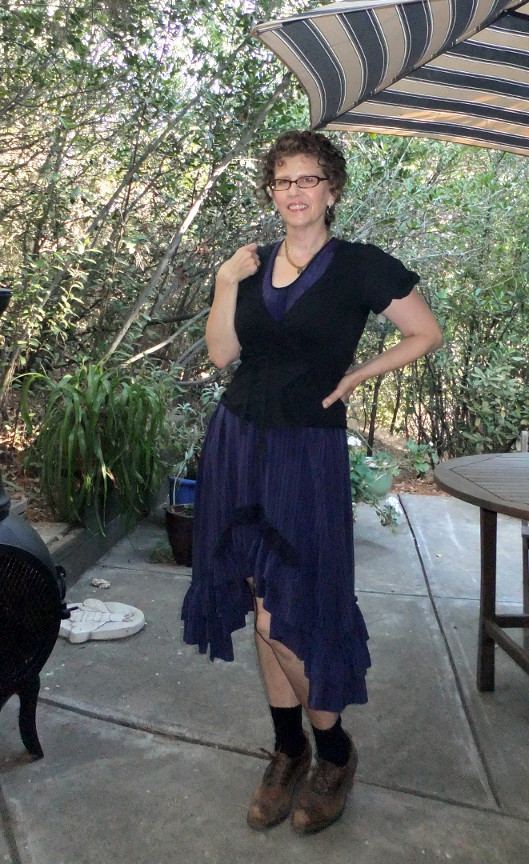 This make of Tina Givens' Zelda Slip Dress embodies slow sewing.  To begin, I'd had the fabric for over a year and a half before i cut into it. I also decided to accent the dress with some lace. I found a beautiful lace, which only came in white.  I knew from experience that the lace's rayon/cotton blend takes dye beautifully, so I used RIT dye in navy to create something more in line with the look i had in mind.  Dyeing took some time, as did stabilizing the silk crepe de chine at hem, neck and arm openings with spray starch. Cutting my own bias trim (of the same stretch denim i used for my Marcy Tilton V8876 frock coat) took more labor than buying pre-made. Hand stitching the bias binding also added minutes and hours. As did arranging all those gathers on the ruffles. 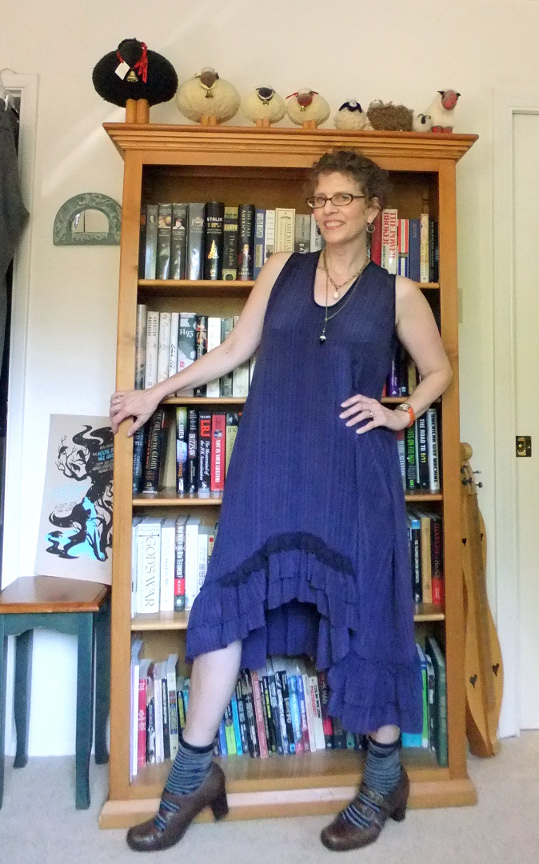 But what really pushed this one over the slow sewing edge were the changes i made after the dress was nominally complete.


As soon as i finished this dress i loved wearing it. I bought the fabric at Stone Mountain and Daughter and it is simply luscious. Heavy without feeling weighed down, delicious soft soft surface, incredible drape and it turns out it is virtually fray proof. Never leave that store without going upstairs to check out the silk on sale!  The sinuous motion of the hem mesmerized me while simply walking around the house. And it's so practical for my life - i can wear it as a nightgown, then toss on a jacket or cardigan and be perfectly presentable to drop Mr. E off at the transit center for his early morning commute.


However, as close as this dress was to perfect, i had a couple of thoughts on how to improve it. The whole line is so dramatic, but the color was 'meh'. I wanted to see it in an equally dramatic hue, and loved the navy of the lace. That was an easy choice. Dyeing - easy, but time-consuming.


The other thing i didn't like was the length in front. My knees felt like they were kind of poking out at center front, and that is not a spot i like my hems to hit generally. (That's why i'm wearing leggings in the pre-navy pictures.) I had a fair amount of fabric left after the first round of slip-making. When i measured this remnant i had just enough to add another ruffle at 6 1/2", behind the original 3" ruffle.

So i set to. As this silk has a fairly 'bouncey' reaction to being gathered (it poofs out instead of falling straight down) i made random hand-pleats for the added ruffle, instead of running stitches and gathering as i did for the original row of ruffles. Seeing as i was there hand pleating already, i sewed the ruffle on by hand as well. It took about an hour, but i like this length so much better than the shorter version. 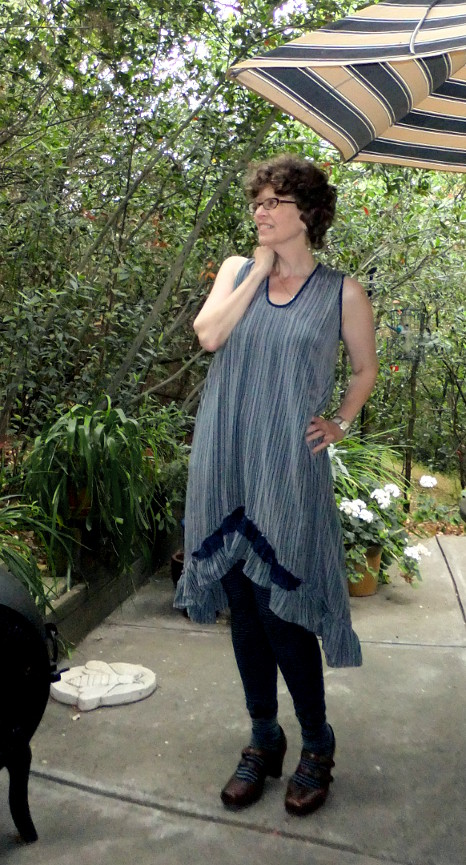 How much that three and a half inch increase affected my reaction to this dress struck me. It's such a small amount compared to the height of my body, yet made all the difference - like letting out a too-long held breath. I did a bit of calculating, of which accuracy i am not certain, and it looks like three inches is just under 2% of my height (five feet six inches).

Which leads me to posit that the difference between looking good and having fabulously killer style is that last two percent. Any thoughts? 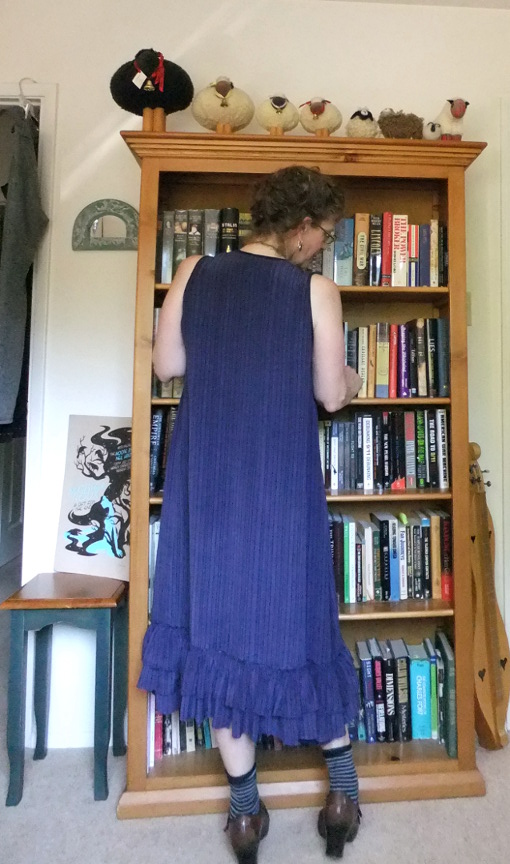 The one part of this dress i'm not so hot on is the neckline. It is fine, just not as excellent as the hem. I'm mulling over converting the bodice part to a strappy cami type of affair, which would be less obtrusive under layering garments as well as cooler and more flattering to wear on it's own. This operation could be trickier than it would seem upon first glance as Tina Givens' wonderful hemlines derive their shapes in part from the length added by the trapeze-shaped side seams.

My favorite part of this dress is the hem. It's not at all complicated, a very flat curve along the back and an upside down "U" sweep in the front. Somehow, these lines and the way they intersect constantly surprise with new shapes. I'm particularly enamored of the squareish garland-bit which hangs off the corners. Great, original looks from every angle - not a common achievement! No wonder this dress is so popular - it also flatters curvy women outrageously. 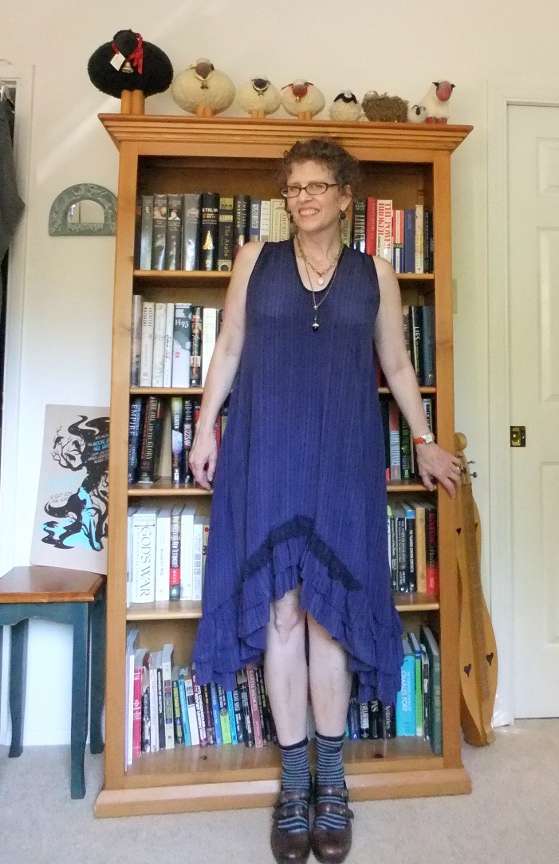 Is going through so much fuss worth it when you end up with something so scandalously luxurious and practical? I always answer "Yes!!" which is why i remain on the slow sewing team.  Are you on team slow sewing, or would you rather watch us from the sidelines?