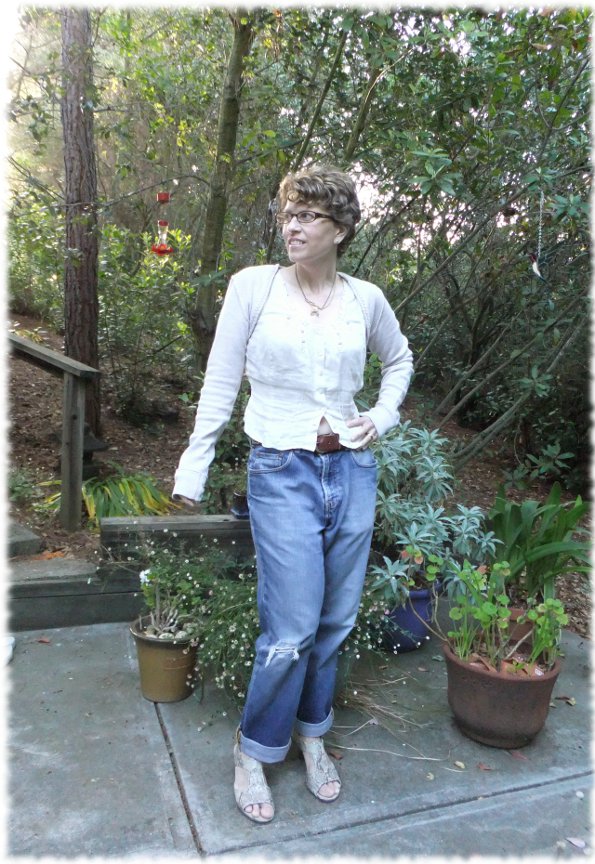 A week ago, Elle left a very sweet comment on my last blog post: "I know you're not lost, but are you wandering? Elle"  That is so considerate of you to ask! I'm not either, it's just that real life got very very busy last month. A lot of it was fun (free tix to Giants beating the Padres at PacBell), some of it not so much (rear-ended with moderate damage to car, but all the people were fine and looks like the insurance won't give us a hassle, fingers crossed). 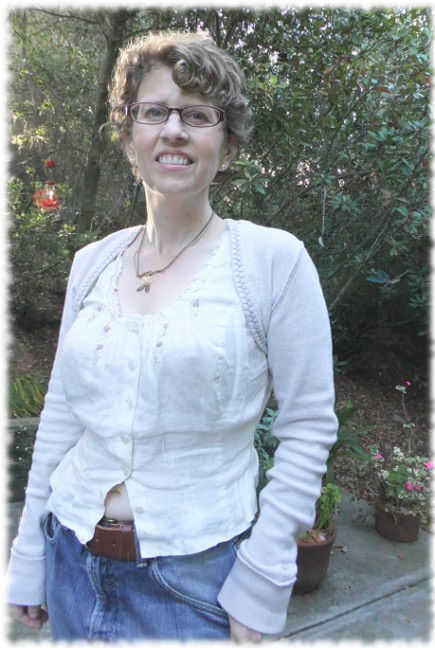 The main reason i've not been posting is because these activities involved driving, riding in cars, lots of walking - all of which aggravates my left leg's nerve troubles. Thus, i also spent a lot of time flat in bed resting my leg. After the number of years i've dealt with this, you'd think a person would get used to it. But i have to admit it puts me in a really cranky mood! And this blog isn't named "The Interminable Ranter" ;) 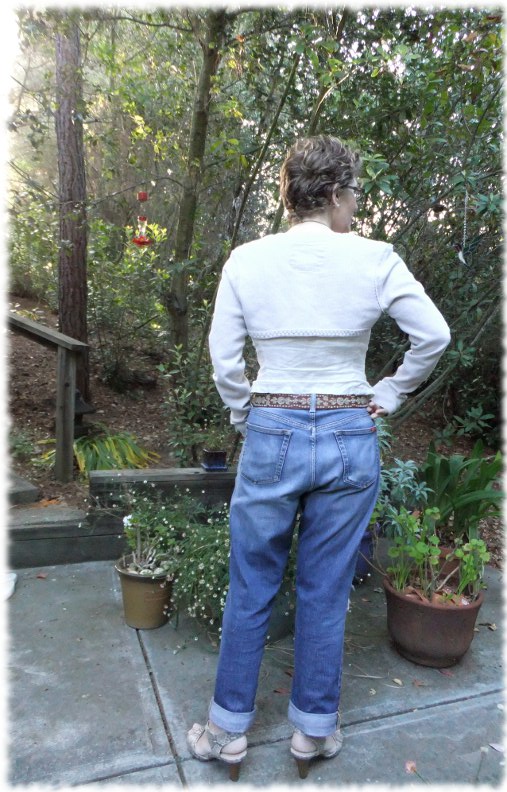 I have been active on the wardrobe/clothing/style front as well, though. I made this shrug out of a unflatteringly bulky waffle-crew. I double-lined the back and cut strips out of the remainder to hand stitch to the edges - et voila! My first Alabama Chanin inspired project! I've been nervous about shrugs for years because i was afraid of how they would interact with the bust, but so far so good. It's really cute with my little cami-tops (heehee, if i say so myself), comfy and just the right weight for so much of our Bay Area weather. I'm looking to make more. Oh, my shoulders really show in this pic! I finished a top from Hot Patterns' Essential Shift Top and Dress pattern (i'll post it later). It's fairly fitted, so i can report that according to their sizing scheme my hips are a size 12, waist 4-6, bust 12-14, and shoulders clock in at size 18. No wonder i sew!

And weirdly enough, I've been heavily re-obsessing over ideas on uniforms and the best structure for smaller/edited wardrobes (heavily influenced by The Vivienne Files and this article by rontlog, who posts on HubPages and at her Chic and Minimalist Wardrobe blog). For a couple of weeks there i felt like i was falling into some type of wardrobe ignorance black hole, tidal forces pulling me in unknown directions. Such a strange feeling after so many years of studying just this subject! I'm finding my footing now, if still a bit disoriented. Who knows what's next! 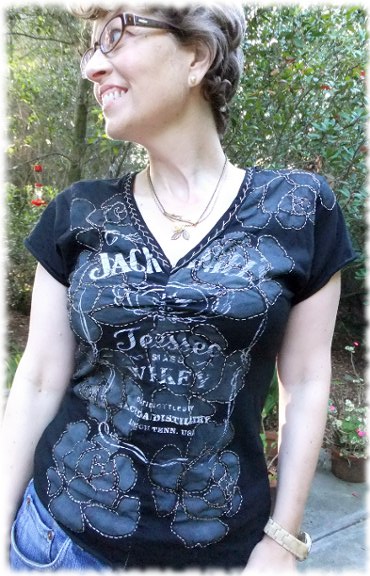 In the meantime i've been experimenting with Alabama Chanin style stenciling and embroidery.  This tee was my first stencil/embroider project. The cotton is so soft and thin, and i thought the lettering would mesh well with the rose stencils. I also wanted to try out the fit of this for future tanks/tees/knit camis. I like it, and it's more wearable than i would expect from an experiment - a nice surprise.

We also stopped by Johnny F's off Union Square. Aren't these Wonder Everest's adorable? And so perfect for walking! At $265 they should be. Here's hoping they go on sale! (Anyone with mondo bags of cash lying around, i take size 9 1/2 ;). 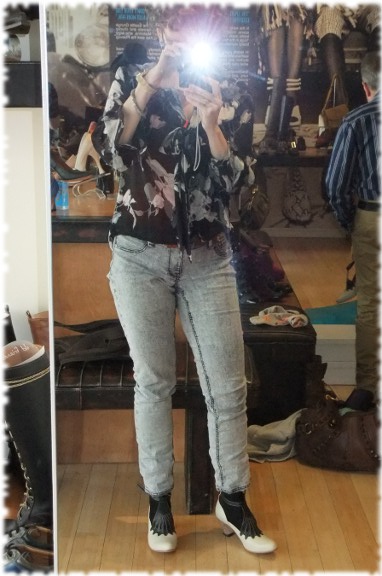 Thank you all for reading and checking in even when i take an unannounced hiatus. It's such a nice feeling that people still take the trouble, especially considering how crazy-bizzy our world is these days. I can't believe a couple of you even signed up to follow during this fallow period - i'm sending all of you readers a big internet hug!  Elle's comment was especially sweet. I don't know if she knew but it was posted on my 50th birthday! Sheer kismet timing, Elle!

*Yep, i'm now officially eligible to become a member of the Advanced Style set. While i am old enough, i fear the urban animal that is Ari Cohen much prefers an edgier, more sophisticated look to my own mix of cobwebby Victorian and the ruggedly ultilitarian, all emanating a whiff of the cornpone. Well, it's diversity that makes this world so fun, and staying true to one's one self that makes it liveable. There's space on the servers for us all. Here's hoping you are having fun creating some spirit of your own, and i'll be back sooner than i was last time!
Posted by tinyjunco at 11:31 AM