Round Two of Rivertown Revival pictures! (Click here for post numero uno.) I echoed the predominant vibe and wore a couple of everyday pieces. I did don some different undergarments in order to change the silhouette and make the look more vintage/festive. I wore a  bulky petticoat, small bustle, and strapless, plunge-backed corset-bra. This had the added attraction of showing lots of shoulder when my top's strap fell down. Who knows why, but baring my shoulders always feels much cooler than even adding 1/2" wide bra straps. My socks are indeed striped in white and light grey, more visible in the sock on your left. I wasn't game enough to wear them pulled up in 100F.

I took almost all of these pictures with a very wide lens pointed in the general direction of the subject. No asking 'May I?' and no posing. This increased my number of possible subjects, since i don't move fast enough to catch up with people on the go. Also, i took some pictures like this one, which catch a certain flavor of the event in an abstract and unexpected way. The awesome take on the 'Double R' logo, workboots, lace, and stripes all set against a sea of hay capture the essence of the day in the way a posed portrait does not. 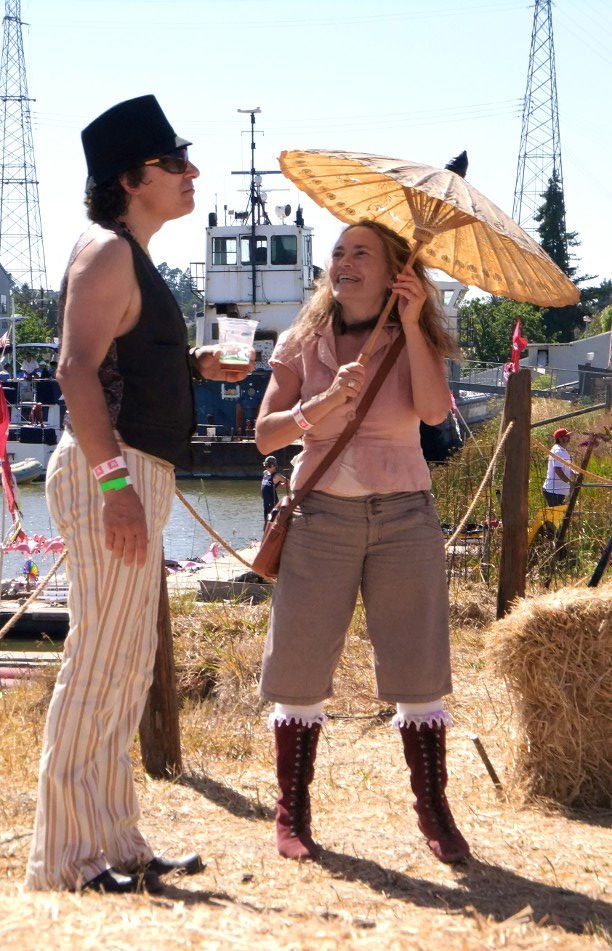 This guy looks like he dug out his favorite trousers from 1969 for the occasion. See what you could be missing a couple of decades from now if you insist on regular and ruthless closet purging? His friend has gorgeous hair and a fetching smile, and created a perfect look for the day without, i dare say, spending a dime. 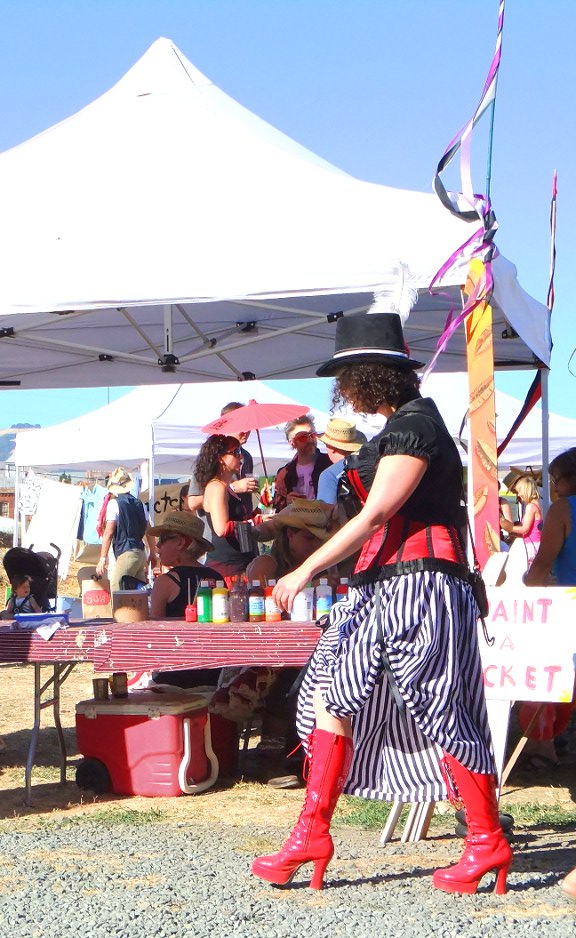 Stripes, corsets, and various hats popped up all over the RR. But these red patent platform lace up boots were the only glam-rock reference to Ziggy Stardust i spotted all day long. 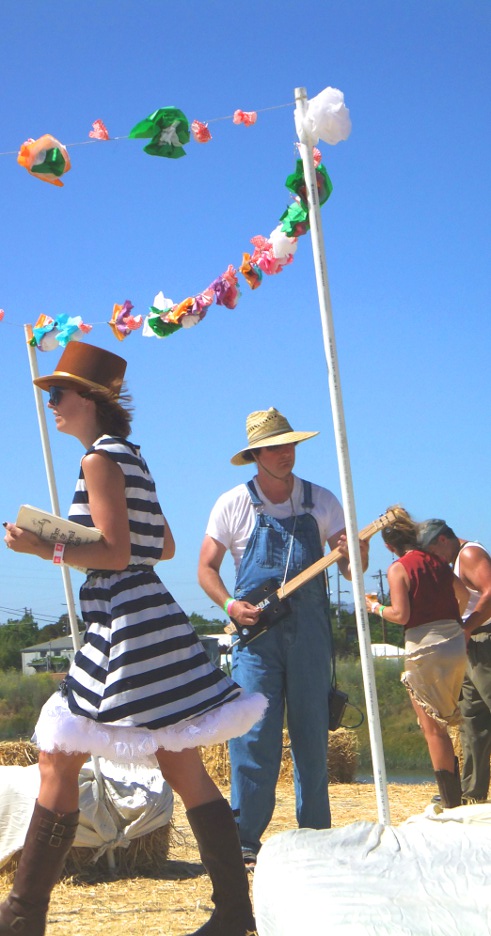 RR has a very nice wedding garden where you can trade non-binding vows with the partner of your choice. Here you get a peek at the lovely decor, the live music, and the officiant. The wedding garden had very nice shady seating - ahhhh........ 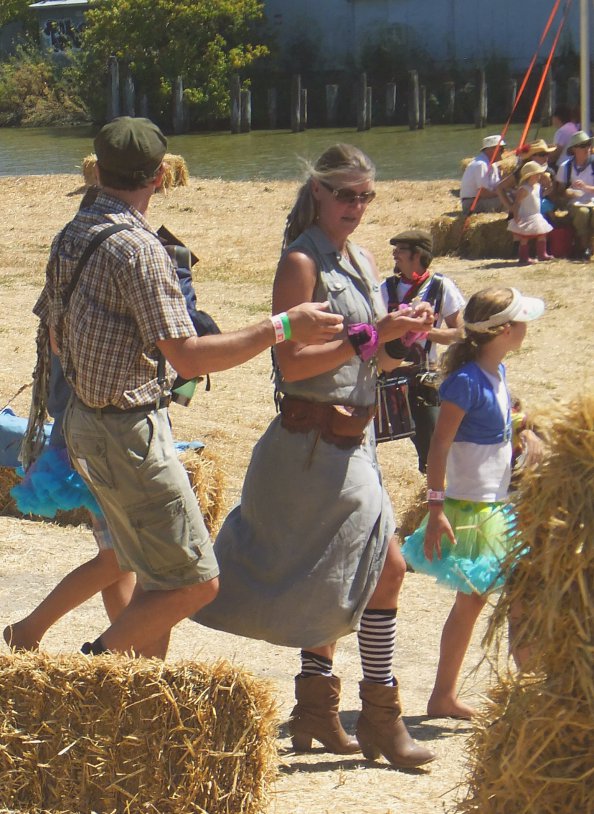 Another couple who got into the mood with a minimum of fun, using a maximum of creative thinkin'. Check out the wallet-belt, and those boots! Those fairy skirts were very popular with little girls - they were like little moving chinese lanterns or crepe decor, adding color and magic wherever they went. 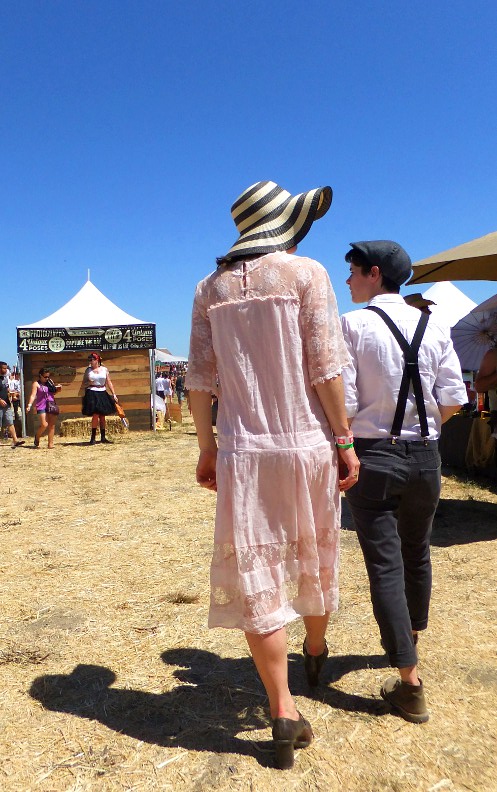 These two girls were so cute! And the striped hat grounds an outfit which looks like it could float away with a strong breeze. I saw a few gal couples dressed as girl/boy. In one case the 'newspaper boy' walked a corseted steampunk bride to the wedding garden altar.

In the left background you can see the photo booth.  In the photo booth you could pose for four pictures (taken by a professional photographer). Afterwards, they posted the photos at the RR website, where you (or your mom or...) can purchase the photos online or simply gaze in awe. The booth had a few props, courtesy of Petaluma store Heebe Jeebe. (Heebe Jeebe's booth at RR was attended by the tattoo lady from last post.) 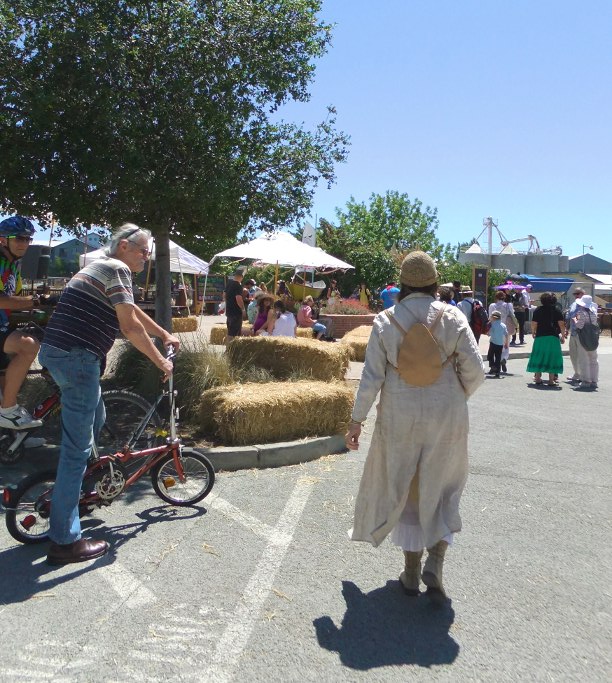 I saw this woman in the ticket line as we entered the festival. I drooled over her look (Beige! Linen! Cobwebby Victoriana! Eccentric doo-dads!). Politely as i could, i told her of my admiration of her sartorial skillz and asked if i could take her picture. She fumbled and mumbled and skittered away from the camera lens, finally agreeing to a visual record of our encounter as long as i did not post the result on Facebook.

Her nervous demeanor affected my own, indeed her last line caused me to laugh inappropriately and try to convey to her my situation - she was safe as could be, as around 65% of the time i cannot even log onto my pitifully inactive facebook account. As she'd knocked me off my composure, and kept on walking, i could only catch a couple of snaps as she strode off to pilot a steampowered blimp.

And so we bid RR adieu. Here's to all of us having a happy, festive weekend!
Posted by tinyjunco at 9:15 AM