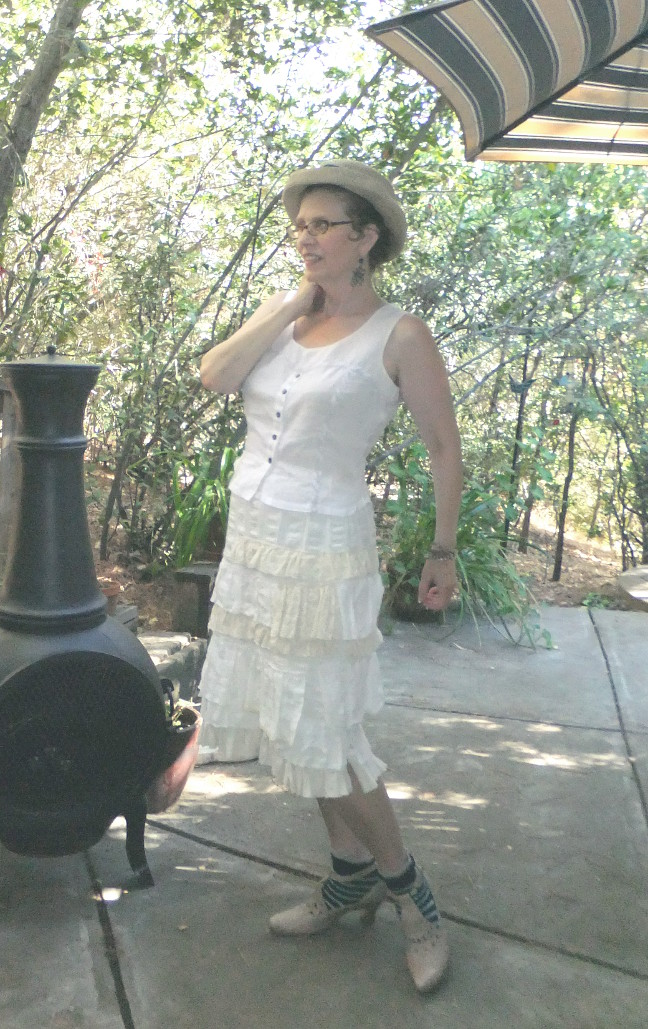 I made a little top. Long time readers (hugs all round!) have heard me complain incessantly about the travails of looking stylish and feeling comfortable in temperatures above 90F. Follow this link to my second post ever on exactly this topic. Living on the border between the San Francisco Bay Area and the Great Valley, temperatures this hot may show up a good six months of the year. Around the time I started The Dashing Eccentric I started to make a few little 'cami tops'. Sleeveless, cotton or linen, with styling bringing to mind the corset covers of the Victorian and Edwardian era, my cami tops made up using little fabric and time whilst broadcasting my own personal style no matter how high the mercury climbed.

I've never been without these style essentials since. However, this spring I had to admit that this part of my wardrobe needed a serious overhaul. My remaining cami-tops were threadbare in places where an artful applique or embroidered fillip would only be appropriate in certain Vegas venues. What's more, I hankered for a more modern, sophisticated take on this garment. Designing a wardrobe workhorse garment which one hopes to become a TNT can be a long process. First, I had to determine my criteria - what functional and stylistic characteristics would I prioritize?

I settled on sleeveless, moderate neckline/armscye, style lines/decorative possibilities hearkening back to the corset-cover inspiration, seamlines offering exacting fit around the bust and shoulders, and clean finish of interior and edges. Based on this list I decided to go with princess seams and a yoke. 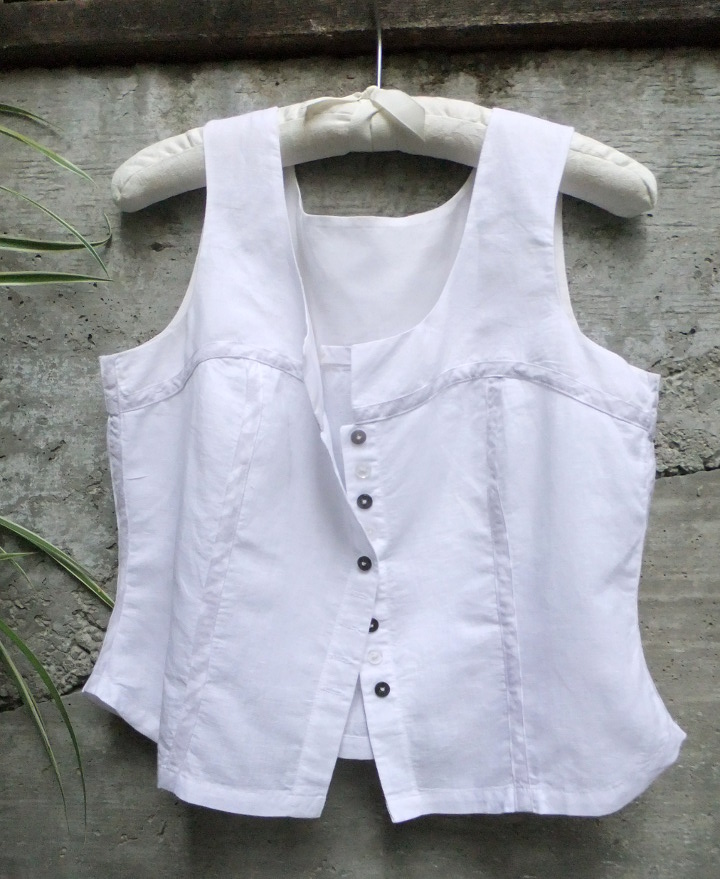 I liked the idea of a yoke for three reasons. It allowed seaming which mocked the top of a corset and allowed for closer fitting through the high bust and shoulders. This seaming could be done traditionally, seam allowances turned to the inside and very subtle, or could be accented with tone-on-tone or contrasting trims. In this instance i used self made bias binding in a low-contrast print.

The third reason I chose to go with a yoke was so I could encase all of the yoke's edges and seam allowances. Above you can see that i sewed the necklines and armscyes of the yoke to a facing, then turned it inside. On the inside of the garment, I pressed up the facing's seam allowances along the bottom edge of the yoke and hand stitched it to the interior seam allowances to finish. You can see it makes for a very clean interior - comfortable as well. 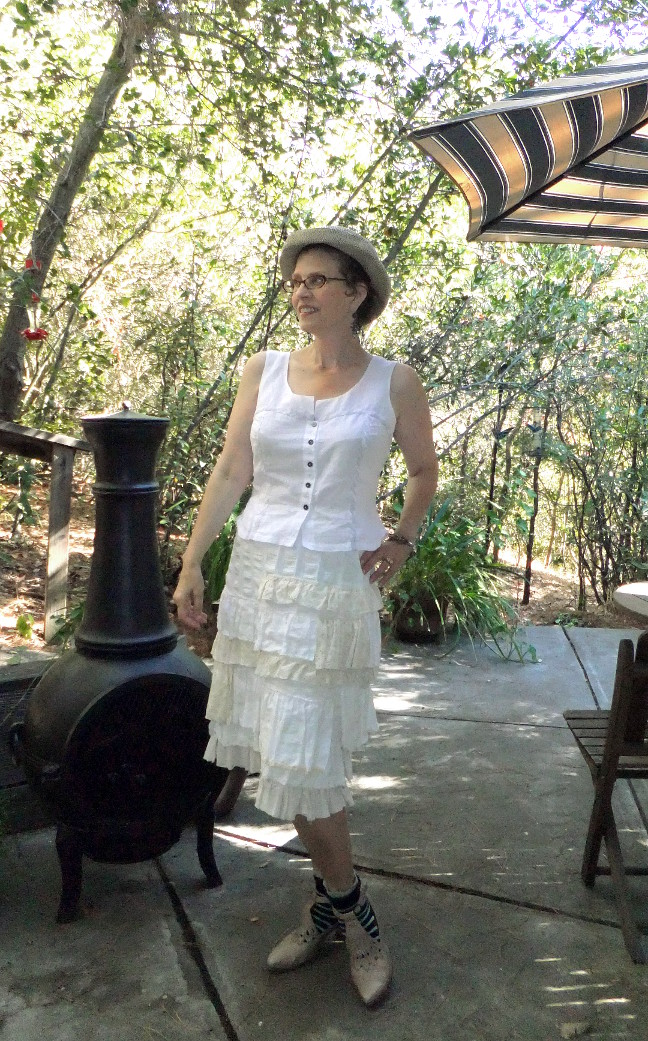 Given this decision, I looked at the commercial patterns available to see if I could find one from a well-reviewed designer with similar lines. I chose Lisette's 6183 design for Butterick. The fit was nice and the pieces went together well, and the pattern includes separate pieces for A-D cup sizes - a very nice feature in any bodice. The design lines weren't so far away from my vision so as to make drafting onerous, though I did make substantial changes. I developed completely different construction methods.

For this garment I chose to use silk organza for the yoke facing. This linen is a bit sheer, so two layers of the linen would have made the yoke appear more opaque than the 'corset' area of the top. This seemed opposite of the effect I wanted of a more substantial 'corset' with flimsier 'yoke'. Since the organza didn't add any visual weight I went with that instead of the linen. 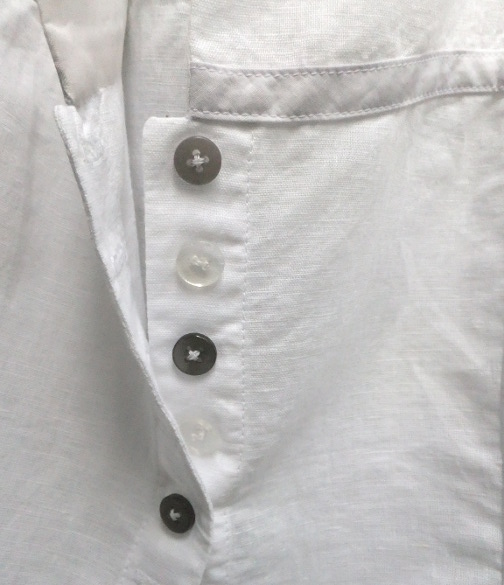 As much as I love silk organza, it is a pest to work with! Long, strong threads grabbing everything, everywhere! Fortunately my choice worked very well for the visual effect and it is nice on the skin as well. The end product was worth the effort. If I'd done all that fussing and it hadn't turned out well, I am sure you would have heard my cussing around the world!

Using bias bindings along the seamlines had more than a decorative purpose. I stitched the vertical seams wrong sides together, pressed and trimmed the seam allowances to about 1/4". I then applied the bias strips on the right side of the garment, topstitching on both edges of the bias strips, thus encasing the raw edges. 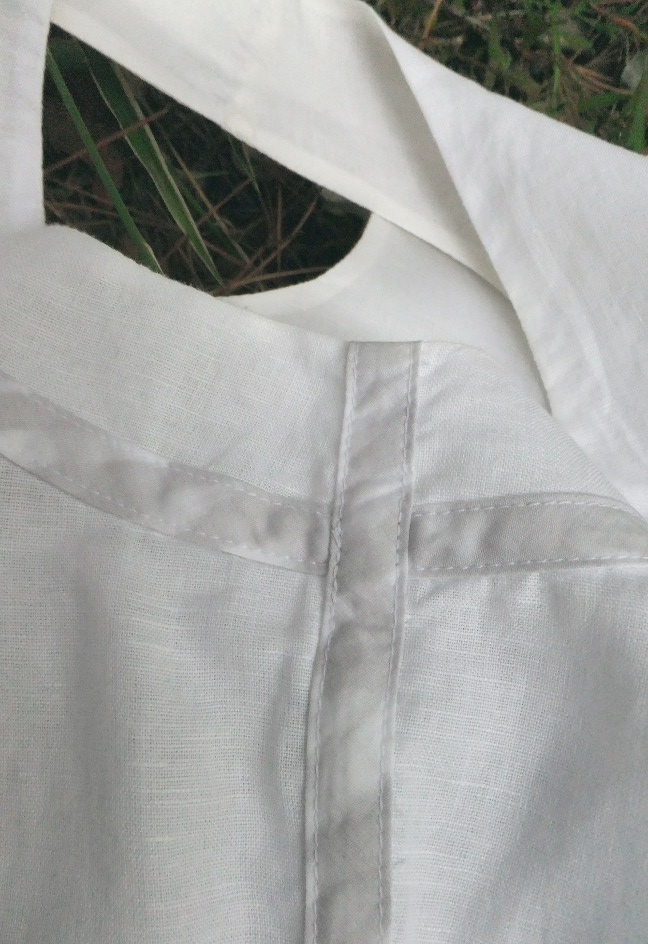 Figuring out the order of construction on this garment, and then working with the silk organza facing was certainly fiddly!   However, the end effect is wonderful. I will be looking for more opportunities to use the technique for seam finishes in future. I am scheming another make of this top in black with a white with black cotton ribbon instead of the bias binding (the curves are gentle enough that it should work without the flexibility of the bias). Using the same color but with a different texture - say, satin bias on linen - would yield a subtle, luxe result. 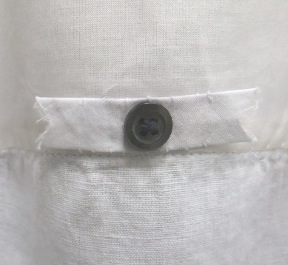 In order to break up the neckline a bit and allow increased ventilation, I put a split in the yoke at the top center front instead of continuing buttons all the way up. I used a combination of dark grey and clear buttons from the stash. Inside, I used one at the center back of the yoke instead of a label, with a bit of the bias binding underneath clipped like a ribbon. 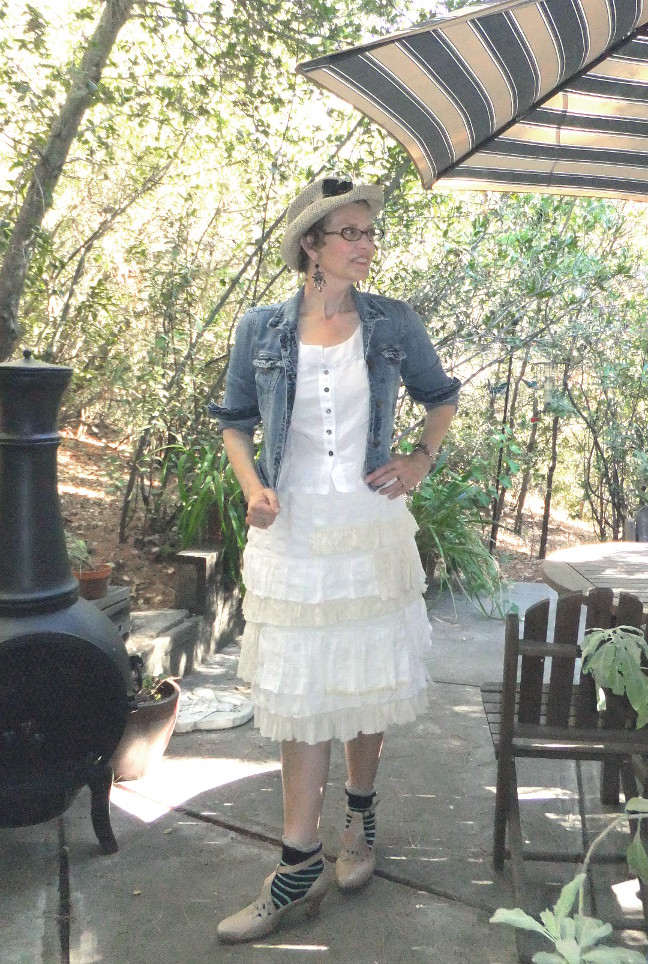 I put a lot of thinking, scheming, testing, and flat out futzing into developing this top - and it was worth it! I look forward to making up more of these tops in neutrals as well as one floral which is drawing my attention in this direction...and I am excited to lengthen this top into a dress as well. Making this design in a dark, clear blue with ivory polka dots in a swingy silk crepe de chine, hitting a bit below mid calf would create a dress embodying easy French chic.

How did you come to your own TNTs? Did it involve lots of planning and experimenting or did it fall into your lap? Let us know!
Posted by tinyjunco at 11:01 AM