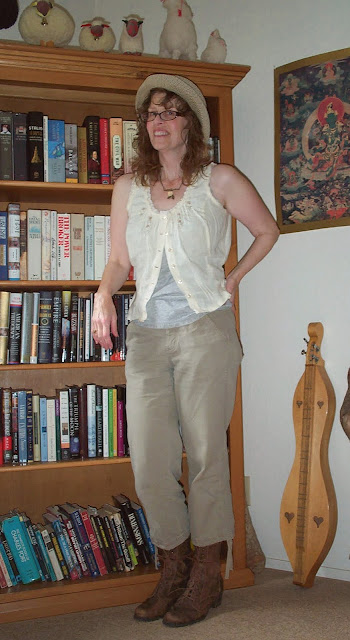 Condolences to Sarah of Misfits Vintage on the loss of  Dame Elizabeth Taylor. Stop by to read her excellent tribute to Ms. Taylor (with a wonderful picture of Liz driving her convertible and flippin' the bird), and give Sarah some love!

Well, we're in that 'winter is over, but it's not really spring yet' phase of the year. Around these parts, we're getting mucho precipitation - hail and rain. Over the weekend i was woken out of a sound sleep two nights in a row by dreadful wind, hail, and rain. Today Sacramento is under a flood watch - take care Bella! Nothing like living on a delta. Of course, this brings us to 'what to wear?' 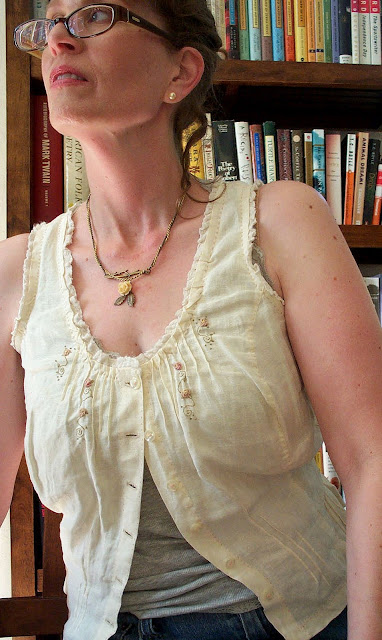 I've been wearing variations on this look a lot recently, on 'around the house' days where we see the sun. It's too cool to wear just a tank, but layering a cami-top over a knit cotton tank while covering my legs hits just the right temp. I love the ease of having a 'uniform', but looking the same all the time drives me nuts. These looks may give you some ideas for adding variety to any 'uniforms' you wear and like.

The biggest difference between these two looks is in the silhouette. The top look is boxy and straight - i chose straight leg pants and buttoned only the top button on the cami-top, surrendering the waist as Angie puts it. I brought the knit top hem down over the pants' waistband to the hip, so there's no indication of the waist. The boots have a lower heel and a sturdy shape, and i wore no belt. The length of the pants contributes to the boxy effect - the straight hem cuts across the calf, shortening the leg a bit. 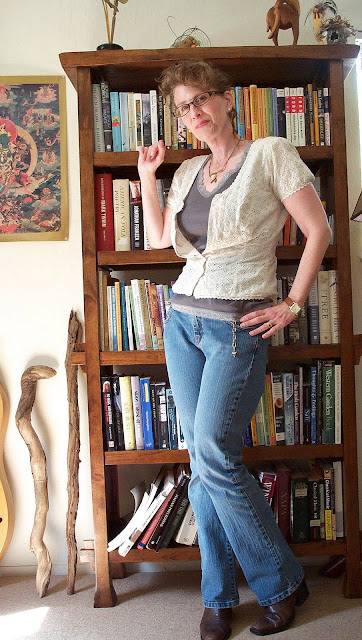 The second look emphasizes my curves. I buttoned the cami-top at the waist, and chose curvy boot-cut jeans.  The booties have a higher heel and sleeker lines. I wore a belt to 'pull in' the waist of the jeans, and as a bonus you can see the little bit of chain hanging down. The addition of small sleeves and changing the shape and size of the head - an 'updo' here versus wearing it down with a hat above - also contributes to a different feel, even though the earrings and necklaces remain the same. I've really appreciated having the 'brainless dressing' aspect of a uniform, while ending up with different looks. Angie at You Look Fab comes up with a lot of these formulas or templates - she calls them 'mom on the go' of 'flop proof outfits' - take a look to see which might work for you, and to get more ideas on how to come up with your own if you're drawn to the idea. 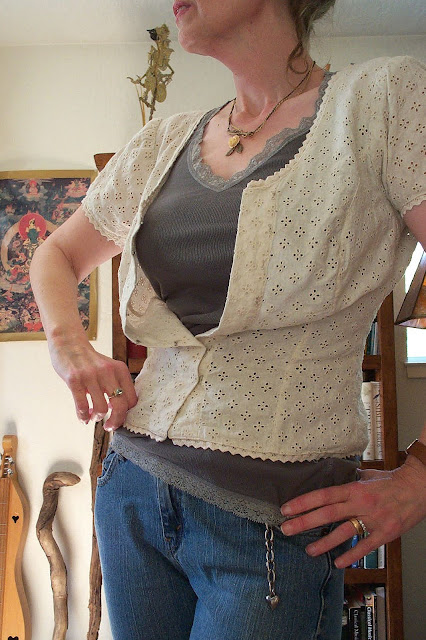 Another way to change up any 'uniform' is to vary the color scheme. You could just vary the color of one item (like the knit tank), go from a light to a dark color scheme in neutrals, or go from a low to a high contrast scheme. The first look here is light newt/low contrast, while the second is a higher-contrast look. If you wear an outfit with one dominant color, especially a bold or bright one, people tend to identify that outfit with the dominant color. So if you wear the same look again but replace the bold color with a neutral or a different bold color most people will 'read' it as a very different look.

I've actually started to get in the 'taking outfit pictures' habit again, but somehow i lost a bunch of photos! That was aggravating. And if i look a little 'tomato colored' in the top detail pic, it's not your imagination. I was having a reaction to a sulfa antibiotic, since resolved. Pardon my french, but what a pain in my @ss. Signs are decent that the infection is receding into the past, which would thrill me immensely. Mr. E has a couple of days off and i'd hoped to spend them tearing about town and behaving scandalously - which is harder to pull off if you're too pooped to pop! Here's hoping you are full of piss and vinegar!!