Life Is Imperfect And Beautiful 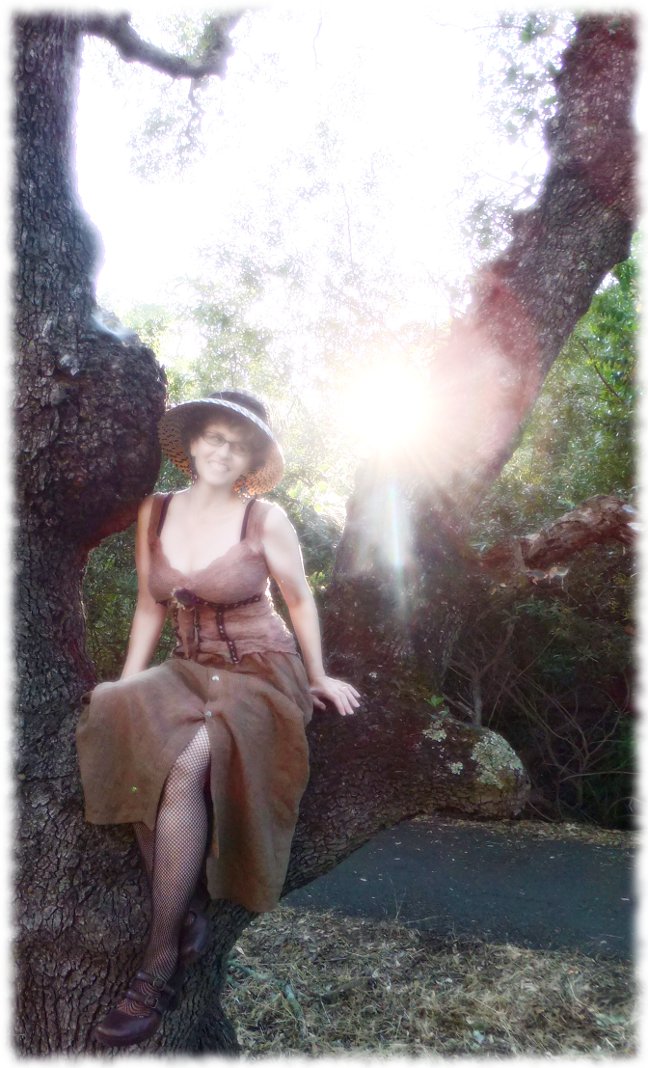 You may be surprised to learn that i did not come up with this post title myself, as it reflects my approach to life so very well. But those aren't my words - they are the founding philosophy of Omhu.  Omhu makes canes. They are in the planning stages of their next project, to make a shower/gardening chair. Now, canes and shower chairs are both objects which our culture places in a special category.  Our culture views both of these objects (and others) in a particularly prejudiced way. Today i want to get across to you how i feel that Omhu's approach to making objects, informed by their philosophy, is about much more than making 'fun canes'. Omhu's philosophy is also helping to break down negative stereotypes about these objects; stereotypes which end up tainting the people who use these objects as tools to lead fuller lives.

The aesthetic in which mainstream manufacturers produce these products (dehumanizing, machine like, using chromes and grey injection-moulded plastic to echo 'industrial' architecture) reinforces these stereotypes, creating a feedback loop. Confronting these objects, we wonder how something so ugly and ungainly could play an integral role in a vibrant, engaged life?  Just looking at a standard shower chair in your bathroom makes you feel you're halfway to 'the home'. It's a viscious cycle.


At it's core, this stereotype boils down to: If you use a cane or a shower chair, it means you have lost. You have been defeated - by disease, old age, accident. Your life, by virtue of having use of these objects, is now less than it was before. Speaking from personal experience, i can tell you that this widespread, sometimes unconscious stereotype is wrong.

Stereotypes are habitual ideas. Happily, we can change both ideas and habits. In the 1920's, Dorothy Parker lamented, "Men seldom make passes at girls who wear glasses". But today, when i whip out my double-C emblazoned eyeglass case,  my acquaintances are more likely to muse, "And I thought she was a Kate Spade gal..." than reflect on my optical deficiencies. Spectacles have become so identified with style and fashion that's it's nigh on impossible to find a pair sans designer logo! Intriguingly enough, this transformation has occurred along with major improvements in functionality, made possible by technological advances. Thinner, stronger, more malleable materials allow better visual correction as well as greater design function and more comfortable wear.

Demographics and the baby boomer generation also play a major role in this transformation. The 'me' generation has focussed on fitness, individuality, and youth like no other in living memory, and they are hanging on to these values with unheard of tenaciousness as well.

Heaven knows we Americans are practically hypnotized by any and all 'technological advances'. From 3-D printing used to make skin grafts to Tang, our fascination with  these innovations knows no bounds. Right now it's evident in the growing acceptance and admiration of prosthetic limbs. True, modern replacement limbs can mimic the look and feel of the absent body part quite literally. But today's attention focuses laser-like on the high performance prosthetic. These limbs enable such incredible feats of strength and speed that legless athletes equipped with these prosthetics have quite recently been barred from international competitions due to their perceived unfair advantage over the merely normal.  This week we will see the first participation of a high-performance prosthetic equipped athlete in the Olympics alongside normal-bodied sprinters. 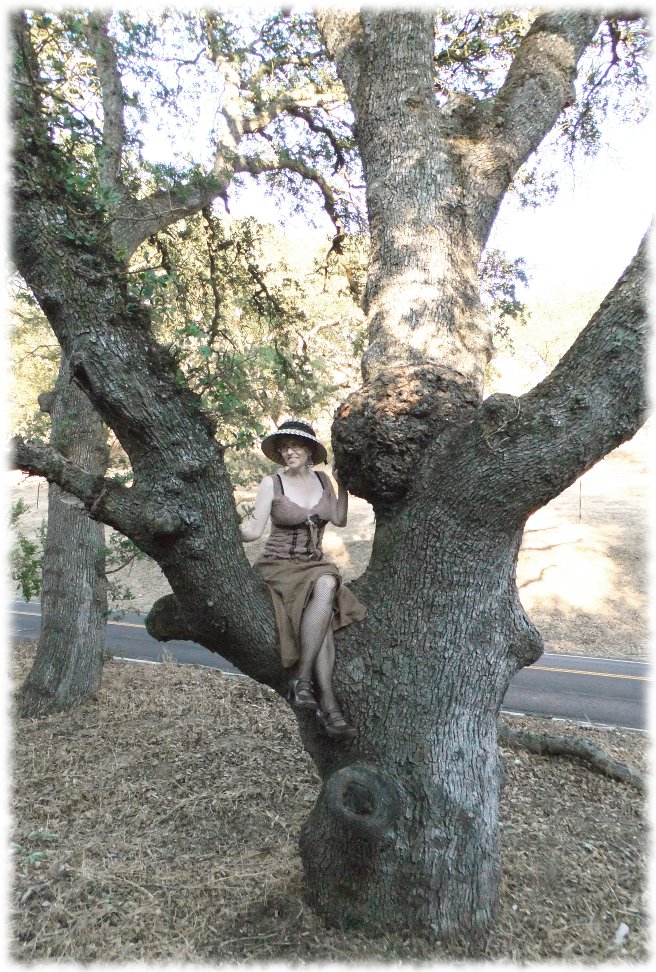 Omhu's vision applies these modern ideas about style, individuality and performance to the stereotyped 'pariah objects' in our society. They imbue their products with design elements guaranteed to bring fun, elegance, and charisma. At the same time great attention is paid to ensuring that the functional aspects of their cane yield superior performance. In fact, the descriptions of these canes will put the average American techo-geek more in mind of his iPad or smart phone than grandpa's walker with it's cut-open tennis balls for traction.

The kicker is Omhu's use of the classic cane shape - much brassier move than creating some new 'high concept' design. This cane is what it's looks like it is - it maintains it's intergrity and has no need to hide it's quite noble function.  It's one thing to lavish beauty and technology on a product meant to be used by the young, healthy, and high achieving. It's quite another to assert that older people, and people with various diminished capabilities derserve the same attention to meeting their needs as well as satisfying their individual preferences. It is this aspect of Omhu's project which, to me, sets them apart from and in front of so many other organizations in their arena.

Okay, you're thinking, all this is fascinating and current and pertinent and thought-provoking (i hope!), but - What's up with the pics of me in a tree? Through my entire life nature has been my solace and my love. Several years ago, due to treatment for severe atypical asthma, i sustained damage which made it impossible for me to walk, sit, or stand normally. I limped, had little strength or stamina, and experienced severe pain. My heart broke when i realized that my days of hiking alone, watching the flowers and trees and various creatures go about their days, could very well be ended. At night, I had many dreams of walking and running freely, often on northern California's austere beaches. During the day, i used every resource i could think of to heal my body so i could do as much as my fate allowed. 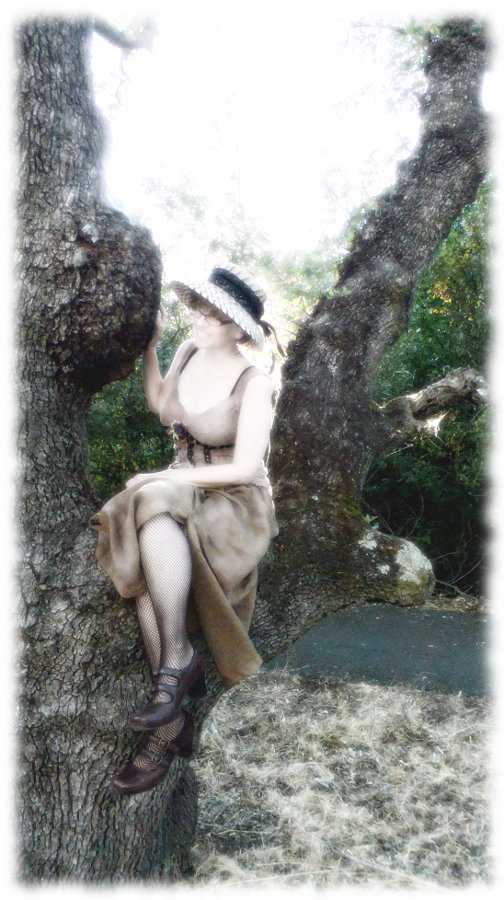 The day i finally found myself out alone in the woods of Point Reyes, espying a few Aminita mushrooms blooming in the duff, just able to make out the sound of the waves crashing on the beach hundreds of feet below the bluff - it was with a cane.  I could not have made it there without a cane, to give me balance, provide a place to rest, and add a bit of extra 'mileage' to what i could do. It even provided a bit of 'security' in it's vaguely menacing deer-antler handle, which guys looked at askance while quickening their steps and flashing a nervous grin.

If i now tell you that i loved climbing trees as a girl, i am sure that you will see my inspiration for the images in this post. Besides, tree climbing is quintessentially imperfect and beautiful. You'll likely end up with sticky sap in your hair or a scraped knee (bloody elbow in this case). But later, when your fingers run over that scar, you'll remember the wonderful feeling of being held in the arms of a hundreds year old giant, high above the land.

Ever since that day back on the trail i've looked at all mobility aids very very differently. To me a cane, wheelchair, or walker means joy, life, independence, and the gift of finding a love you were certain was forever lost. An onlooker on that bluff may have thought 'how sad that such a young woman needs to use a cane....'. But they wouldn't have known the truth. I was exhilirated to be once again where my heart belonged.

Thank you Omhu for making a cane that looks as beautiful as it deserves to be.


This post sponsored and made possible by Omhu. Omhu is a design concern that makes premium medical equipment and accessories. Danish for “with great care,” Omhu was founded on the belief that life is imperfect and beautiful. 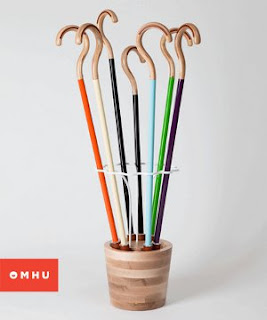 on edit: Kevin with Omhu sent along a nice picture of the canes Omhu makes, just in case you're unfamiliar with how they look. You can also keep an eye out for Omhu's ads, which showcase the ladies of Advanced Style along with Omhu's product.
Posted by tinyjunco at 7:23 AM