Mrs. Bossa Gets It Done


I've been very flattered and excited by your response to my Checklist Analysis post. I worried that it would be too 'thinky' and abstract to draw readers in, but so far people seem to find it intriguing and inspiring. As readers have requested more examples of using this checklist on particular outfits, here's your first one.

A few days after i published the post i received an e-mail from Mrs. Bossa of Mrs. Bossa Does the Do, asking for my thoughts on a couple of her recent looks.  She'd been thinking about finding a new 'Fashion Formula', as she terms it, for her work outfits. She ended up taking inspiration from the house of Marni, and came up with a couple of outstanding outfits after boiling down her observations to this :  "In the end I decided that there were a few key elements to my favourite Marni looks: on the one hand unexpected colours and quirky statement necklaces and on the other, the aforementioned ribbed knee socks and ‘dull’ old grey tights, worn either with peg trousers or knee-length skirts."  (Find Mrs. Bossa's original post on how Marni helped her come up with her Fashion Formula here.) Read on for my checklist analysis, and a response to my thoughts from Mrs. Bossa herself.

Silhouette:
Sleek with a surprise - just a little to the side of a 'classic' fit/silhouette (a bit on the roomier side), with certain unexpected details in where hems hit, etc.  So there's a wee gap between skirt hem and top of socks, trousers are rolled into cuffs, even tho they're being worn with socks, which you'd think would mean it's cold, but she's wearing sandals, so....... (there's nothing i love more than creating an outfit which creates this kind of hamster wheel thinking in the observer's mind). There's also a sharp edge here and there to focus the look - pointy toed shoe, nice and sharp shoulder on the jacket, pointy triangles on the sandals made emphatic by wearing a contrasting sock underneath.

Drape:
The fabrics' drape emphasizes the silhouette by having enough body to hold the line of the cut without being stiff or bulky. Even the material of the skirt falls neatly, as opposed to being overly flowy or clingy. The

Texture:
Also works to put the focus on silhouette by staying in the mid-range - generally matte, but with enough variation (nubby sock here, shimmer of silk crepe there) to keep things lively.

Color:
The general idea is a newtral background with one or two contrast pieces - either contrasting in color and/or value (light vs. dark).  What adds that quirky unexpectedness is that the background pieces vary in color (not so much in light/dark or value). So in the trouser look the shell is a dark navy, the jacket black, the socks dark grey. The navy shell is a brilliant touch as it's the color opposite of the orange of the trousers, making the contrast more vibrant. Joanna uses another quirky strategy for creating the 'background' in her skirt look, by 'backgrounding' pieces (necklace, shoes) which are generally highlighted in outfits. She accomplishes this by setting them next to or on items with a very similar color and value (black necklace on black sweater). Again in the sweater/skirt look, the 'background' pieces vary in color, not so much in value - grey socks, black sweater and necklace, dark brown shoes.

If Joanna wanted to create more looks with this general feel, one choice would be to make a light value background for a dark value and/or contrasting color item. For example, she could use the orange trouser once again as the contrast piece, but make a background of light newtrals. Including at least one piece with a warm green base (for example, a light sage cardigan) would up the contrast even more, as she did by using the navy blue shell. She could wear the same light-colored sandals with  light grey, bone, or cream colored socks, and so on. Or she could wear the skirt and sweater of her second look with the same sandal and sock combo of my first example and go light on the rest of the pieces, making the black sweater the contrast piece on a light background.

Pattern:
Doesn't play a role in these looks.

Detail:
Plays a big role and helps create the quirky, unexpected feel to what are at heart fairly basic clothing items. Again, 'backgrounding' a statement necklace by wearing it over the same color and value, wearing nubby socks instead of hose, leaving a gap between hem and sock - these are the touches that set these looks apart from the ordinary. The individual clothing items all lack much detail, being spare and clean.Tthis adds to the modern feel and keeps the quirky touches from feeling overly fussy or contrived. Another aspect to notice is that the details and

Accessories:
All have a geometric feel. the necklace is composed of circles, the shoes have pointedly pointed toes, the sandals make nice triangles. These work well with the sharp shoulders of the jacket and rhythmic pleats of the skirt. Nothing is representational or organic in feel.

Style References:
Well, Joanna let us all know these are her take on the aspects of Marni's work that she was drawn to. I wouldn't have realized this if she hadn't told me, because i don't follow the collections really at all (bad style blogger!), and don't know anything about Marni except that it's a designer. However, taking a gander at Joanna's inspiration pictures, i can see the influence. Joanna's take on these looks is definitely more wearable than the runway looks, and i appreciate the creativity they show more than i would seeing a lady all decked out in Marni's latest - you can wear a designer's look wholesale and have these same quirky touches and subtle use of color, but all of the decisions have been made for you. Taking inspiration requires that the 'inspiree' dissect their own response to the designer's work, and come up with ways to translate those responses into their own wardrobe and lifestyle. In a strange way, this approach to a designer can bring you closer to their clothing and creative process than dropping a few bills at one of their boutiques.

I love these looks, they are very wearable and really fun. You could come up with a load of different looks in this same vein, there is a lot of room for variety but the general structure is solid enough that you won't be flapping around for ideas or direction. Brava Joanna!!! 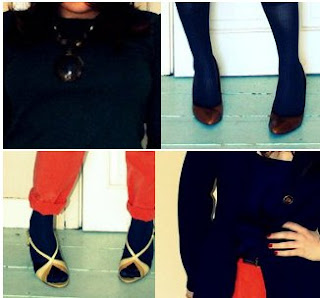 
Joanna's Response:
"This is fantastic - I've read it twice! It's so interesting to see my style with a fresh eye. I never even considered the effect of reducing statement pieces to background ones, but you're right: my emphasis is on a clean silhouette and quirky little details. I realise now that outfits that have felt really dull have been missing these details. I was fascinated to notice the geometric shapes in my clothes, too, something I'd never been aware of - fussy and flowing ain't me, that's for sure! I'm still mulling over the section on colour, as I'd like to try the suggestions you made, and I never thought about the 'value' of the items I choose. I have been branching out into colour blocking, which I'm enjoying, but the pieces themselves are always simple, as you can imagine. I love the section on the trousers socks and sandals - that 'hamster wheel' never occurred to me!"
Thank you Mrs. Bossa - both for your kind comments and for allowing me to use your looks to help illustrate my checklist.
A word on how i 'do' the checklist. I generally look at the outfit, run through the checklist and get a 'gut feel' for the major elements : silhouette and color, for example. I then spend a few days to more than a week mulling in my mind, going back to the pictures, making notes here and there as it occurs to me, until i can do a write up in just a few minutes. That lets me know i've reached a decent level of understanding. So i use a very analytical, left-brain tool (the checklist), but i wield it in a very right-brain, fluidly creative manner. I find that this get 'both halves' of the brain in on the action. As a result, i'm much more able to create looks i love organically, just throwing them together; but when i do get stuck i have the ability to 'think' my way into an equally great look.
I want to do a couple more of these type of posts, if you have one you're interested in having me look at just send a note to pygmyowl@sbcglobal.net.
Posted by tinyjunco at 9:03 AM