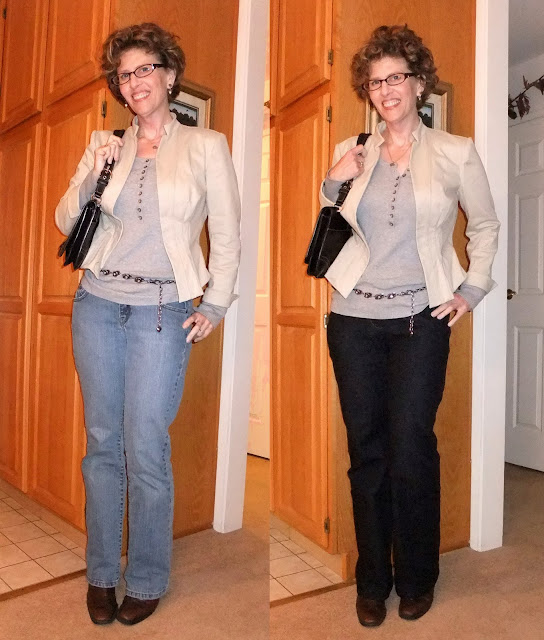 On Edit: If you're in a rush, start first with the comments! Many readers chimed in with smart, fantastic points - and they're not long winded like me. Thank you to all who took the time to comment!     First, apologies for the rather uninspiring photography. But this post is constructed more as an experiment, less as an aesthetic excursion. The photo on the left was taken simply to remember the outfit, as i enjoyed wearing it and liked the subtle play of color and the monochromatic feel. I felt it lent a pulled-together effect to the look and created, as Kendall Farr puts it, "the Almighty Unbroken Line".

Ms. Farr's description encapsulates one species of advice often given to women hoping to 'dress better'. The idea is to create a long, lean, smooth silhouette in your clothing. No lumps and bumps, no super tight areas or swaths of uncontrollable fabric. Also, no high contrast 'breaks' in unflattering areas - for example, do not wear a white blouse with a black skirt with the 'edge' between the two at your natural waist, since this will cut your figure in half, creating a blocky feel. One obvious way to implement this advice is to wear monochromatic looks. The whole of your outfit flows easily from tip to toe, creating the longest line possible.

Another very popular piece of advice, especially regarding those leaving childbearing years behind, is to only wear very dark wash jeans. The darkness hides lumps and bumps and it recedes as well, so your bum, thighs, and whatnot will tend to fade away and look smaller, possibly more discreet. Now, i've recently been wondering about what would be the consequences if a woman were to follow both of these pieces of advice simultaneously. I think I've been reading so much of this type of thing recently that my brain made an executive decision: 'time to synthesize!'.

At any rate, a few days later i was getting close to finishing the darker jeans. They are iteration number two of the Palmer and Pletsch Perfect Jeans pattern, this time in bootcut silhouette. I suddenly realized that i could 'isolate the variable' in the monochromatic outfit - change out a light wash denim for the dark wash denim that is strongly recommended as the only wash worth wearing for ladies over forty and observe the result!  I was hoping to get a feel for which 'piece of advice' was more worth following strictly. (And frankly i was hoping to show that following any piece of advice to the letter all the time is folly.)***

So, i ended up taking the dark wash jean pictures in the same place as the original 'notebook' photos. I did my best to adopt similar poses and camera position. Looking at the two outfits, i'm more drawn to the monochromatic look - even though the lighter wash jeans don't 'hide' as much of what's going on as the dark wash do. On me the high contrast line cutting right through my hips seems too stark, and ends up emphasizing the width there.  I do wonder how much this has to do with my overall low-contrast coloring, however. On a woman with high contrast coloring this look may well appear more harmonious.

Which brings me to the last point this experiment brought to mind. If i like the way a monochromatic look creates a nice line, and i only wear dark wash jeans, it will be very hard to avoid wearing a lot of dark colors right next to my face. And generally i prefer to wear lighter colors next to my face - because i find they are more flattering! Which i thought was the driving motivation behind all this fuss.  Good grief, all these 'rules' can drive a person nuts!!!! That's the one rule by which i am sure to stand.

I don't often discuss non-clothing related topics on this blog (although my definition of 'clothing-related' is quite expansive). But i've recently run across a couple of videos which may interest some readers. First, if any of you are interested in the more rigorously collected evidence for life after death/communication with spirits, i cannot recommend this video enough. It outlines the Scole Experiements, a five year long project in Scole, UK which involved four people meeting twice a week to attempt communication with the dead. Well done. (As a style-aside, at 38 minutes in observe how different the 'red rose' mother looks in video versus a still photo. Different media capture our likenesses in different ways.)

Secondly, for decades now my family and friends have wearily endured my exuberant soliloquies on the genius of Jacques Vallee. Being the basis for Lacombe, the French UFO investigator in Speilberg's Close Encounters of the Third Kind (played by Francois Truffaut) was only so impressive.  Not that i cared about that - his identification of Marshall Applewhite as a dangerous cult leader years before the Heaven's Gate tragedy, his vast knowledge of ancient and historical encounters with otherworldy beings, his ability to wring every last drop of physical evidence out of the most unpromising circumstances, his masterful 'Contact' trilogy......

I could go on - and for many years, i have. Now that TED has tapped Dr. Vallee for a talk on The Theory of Everything (else), i 've been having a wonderful time saying, "I told you so........"

*** In other words, yep, this experiment was rigged!