More B7tch1ng About The Weather 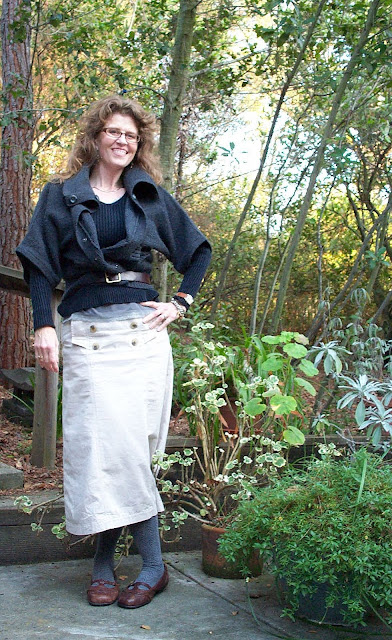 Note to readers: Mr. E has posted his reflections on being featured as a style icon, the fickle affections of the lens, and modern funerary practices in an edit to our last post (as well as in the comments).

This ensemble appears just about right, as it shows in the top three photos. Clean lines with enough textural interest to keep things from being boring. Nice proportions, flat shoes that make walking easy but which also add a nice vintage element to the whole look. And the chunky sweater easily comes off or on to deal with any temperature fluctuations. Looks like a slam dunk! 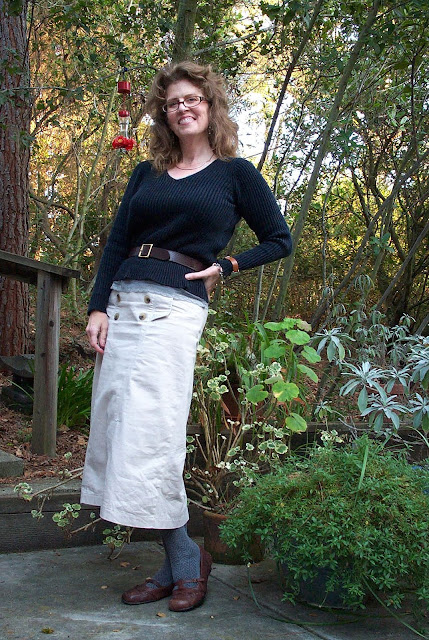 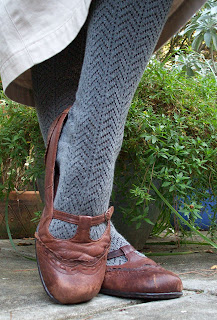 Except when you leave the house for your daily constitutional. Chunky sweater is knitted of chunky yarn, leaving chunky holes through which clammy air can wind  it's fingers around your delicate ribs. And this jacket is a bit much on top of those small, flat shoes. Nice and big up top, medium past the hips, then ...... where's the feets? 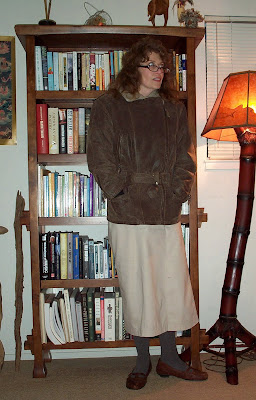 But the worst of it came in the late afternoon. The sun burned through the fog for an hour or so, hitting the roof at just the right angle to heat up the house by around 20F degrees in minutes. This was just the time i'd penciled in for some quality time with the vacuum (which always gets my blood going).

Well, it's been a while since we've had a good vacuuming photo around here. I'm not at all sure how those texture-y socks look with the lace-trimmed tank and bare arms......maybe i should've left the belt on? 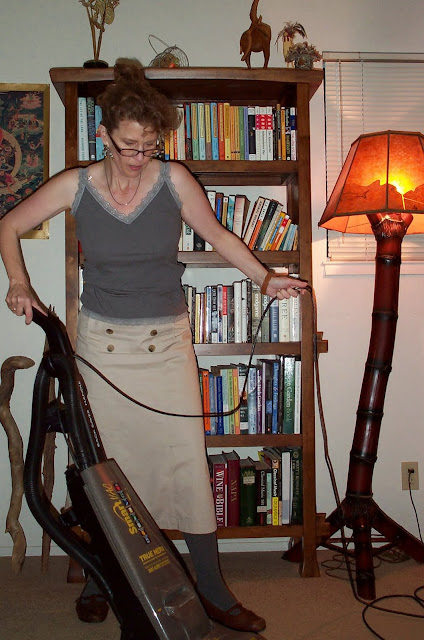 It's all because of this blasted weather! It's been gloomier than glum the last couple of weeks, as we've been in the grip of tule fog. Tule fog, also known as valley fog, is technically a type of 'radiation fog'. It manifests (very spookily!) when the temperature drops to the dew point in a low-lying area where the ground has become saturated with water. This type of fog literally forms from the ground up. Here's a great description of the evil that is tule fog, "The visibility in Tule fog is often less than 1/8th of a mile, about 600 feet, but can be less than 10 feet. Visibility can vary rapidly in any area, with sudden decreases to near zero in only a few feet. It is situations like these that often lead to multi-car accidents where one car follows another into a fog bank." (from the NOAA website). This photo on Flickr gives you a feel for typical driving conditions in this type of fog.  (Scare yourself silly by imagining driving in tule fog courtesy Google images.)

But the facts above don't begin to address the psychological aspect of living inside of a dingy ball of cotton candy fuzz for days, weeks, or months on end. Sunday morning i woke up and was thrilled to see how sunny it was! It was also nice to hear the steady downpour hitting the roof. Yes, your classic rainy day is brighter than living in tule fog.

So, the moral of today's post is the same as always - take it all with a grain of salt (or more).It's easy to look pulled-together for 1/64th of a second, and it's possible to edit any mundane life into an exciting, attractive post. I don't know about anybody else, but i have plenty of loose ends, stumbles, and bad hair days. I leave that out because no one's interested in that (if you were, this'd be a comedy blog). But i assure you it's here in my life, as much as in anybody else's.

And there is hope after all - 'mostly clear skies' predicted for the end of the week!