I Walk With Death 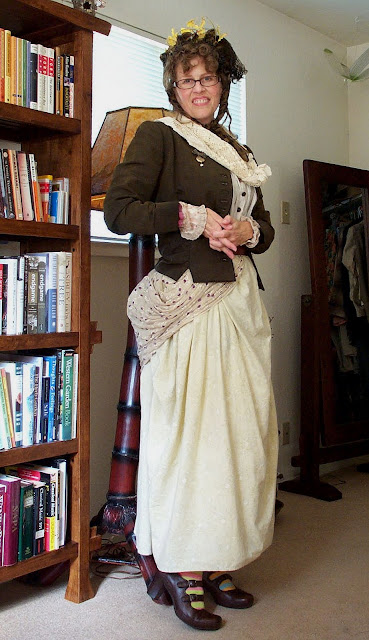 Halloween!  Mr. E, who moved to the west coast from Long Island as an adult, thinks that Halloween is like the national holiday of northern California - we're into it around here. Not just the kids.  In fact, 'adults' are probably even MORE into it than the tinier trick o' weeners!

This is a costume i first came up with 3-4 years ago for Dicken's Faire.  It's not really the best for Dicken's, since it has a bustle instead of the Dicken's approved hoop skirt. However, i was able to make a passable bustle out of an old worn out sheet, whereas a hoop skirt takes several yards more of fabric and yards and yards of horsehair, plastic, or spring steel bones. It's a big cost and time difference.

And it's much easier to get away with a waist cincher from Sears with a bustle and smaller skirt like this one - a true hoop skirt is so heavy that you need to spread out the weight over a properly constructed and fitted corset.  I got some looks 'down the nose' for being a bit of a time traveler (1890's in the 1842-63 of the Dicken's Faire), but most people got a kick out of it. At least i made an effort! 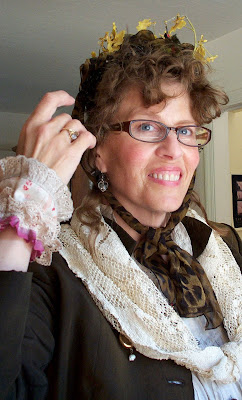 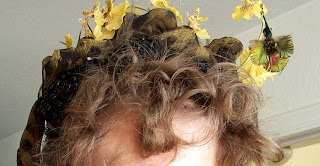 I've added bits and pieces over the years. This year i made lace cuffs, out of scraps on hand, as i was so inspired by Sheilas' Mad Hatter ensemble. 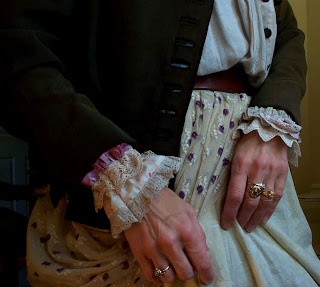 I'm a big believer in making costumes out of whatever's to hand, making as much of your own costumer as possible, and avoiding ready made costumes like the plague. I suppose they have their place, but off the shelf costumes are made of such cheesy materials and look so fake and chintzy.....plus they tend to lack any hint of creativity or fun.

Mom made us the most wonderful costumes growing up - dyed a sheet orange and green, sewed it into a loooong triangle with holes for face, arms, and legs; stuffed it with my brother and wadded up newspaper and Voila! Giant walking carrot! According to my brother, pretty darn uncomfortable, but what a sight!  Or saving the box our washing machine came in, again cutting holes, and painting it into a giant Cheerios box.  Mom set a pretty high standard! 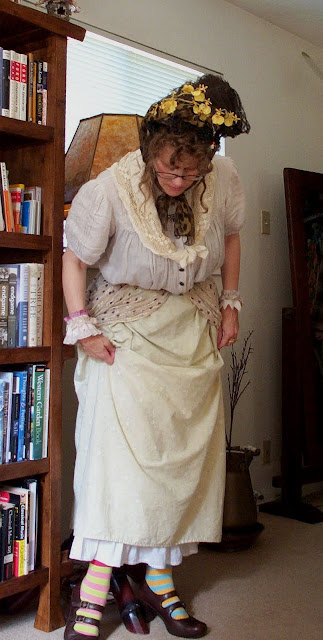 So. The low down. I made the bustle from an old sheet. I wore a waist cincher from Sears (origianally for low back support). I made the skirt out of some cotton that i bought out of a car trunk. The 40's hat was handed down from a great aunt. I trimmed it with a gift scarf, fake orchids from an arrangement we had around, and a feather-hummingbird earring i bought from a Ren Faire vendor. The 40's jacket made it's way to me via my sister (along with this one).  It's too tattered for even me to wear except as a costume.

The lace tablecloth worn as shawl was a gift from a fellow Sunday School teacher, decades ago. The nylon lace worn as an overskirt was mailed to me by a friend who has the knack for garage sales which i lack utterly. Blouse, petticoat, socks, earrings, necklace, belt and shoes are all wardrobe staples. I wear the watch and bow as a pendant frequently, but pinning them to the jacket gives the piece a more antique feel.

We went over to my mom's place for the evening. We never get any little ghoulies at our place, while they tend to swarm over mom's neighborhood. Plus, mom has three dogs so we figured she could use the help corralling them every time the doorbell rang. Turnout was plentiful, and the dogs are hoarse today!  Here's my spooky escort: 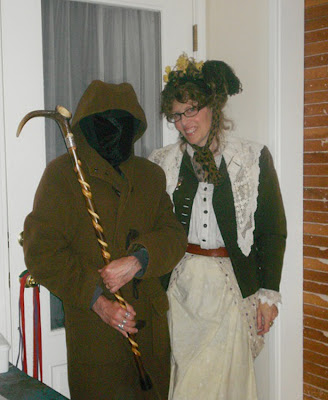 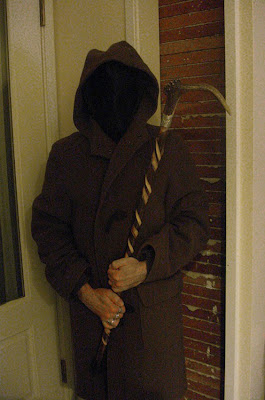 This shows what you can do with a little thought.  Mr. E's regular duffle coat, pants, and shoes, and my cane (which has a suspiciously sickle like silhouette). The one purchased item is the mesh mask.  This costume is at it's best walking around deserted paths at dusk - more than one big strong man has hastily give Death a very wide berth in those circumstances!

Now i'm off to ogle all the fashion blogger's Halloween get ups!   I hope all of you had a fun holiday!
Posted by tinyjunco at 10:25 AM